QI read a lot of financial advisors talking up the power of compounding interest. With average deposit rates of around 7 per cent (roughly 4.5 per cent after tax), I can’t see how this compounding is a significant advantage.

I do not want to discourage savings, but as an example, after say 25 years of savings, the majority of what you have saved at 4.5 per cent is still your money and not what you have earned as interest. This is assuming you save at the same regular contribution rate. If you increase your savings rate, it would be even later.

I did a quick calculation of regularly saving $100 per month for 30 years at 4.5 per cent interest. The interest you have earned only begins to exceed what you have deposited in the last 2 or 3 years i.e. after 27 years!

No wonder so many people seek instant gratification from spending, when benefits for savings are so far off.

I have a different attitude to savings. I see it as deferred spending. What I don’t spend now, I can spend at a later date. The interest I earn is simply a bonus, but not a significant motivator.

AI think the point you are missing is that, if you are making regular savings, some of the money you deposit has been invested for much less than 30 years. A third of it has been there for less than 10 years. So the interest on that money hasn’t had all that much time to compound. 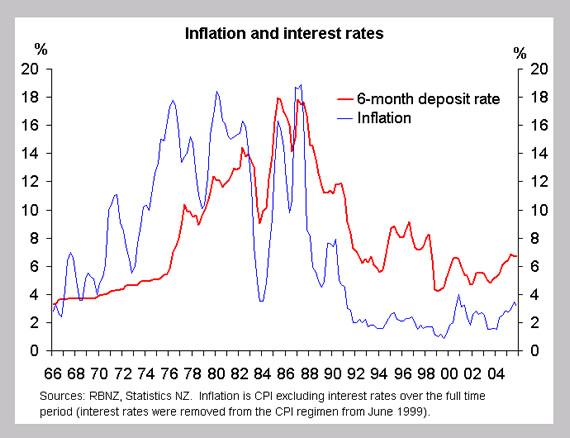 Even so, I reckon compounding is still pretty good. In your example, you would deposit a total of $36,000 over the 30 years and earn interest totalling about $38,700. Sounds quite significant to me.

If you left your money there for just another 18 months, the $36,000 would have quadrupled. You have to acknowledge that that is significant.

True, over shorter periods compounding is not as exciting. Even so, $100 a month for just 10 years totals $12,000, and 4.5 per cent compounding interest on it totals more than $3000. That has still boosted your savings by 25 per cent in a really safe investment.

Readers can work through other examples on the regular saving and lump sum calculators on the Retirement Commission’s website, www.sorted.org.nz.

There’s another important point in all this. These days term deposit rates are way higher than inflation, which is currently around 3.2 per cent and is predicted to fall to around 2.3 per cent over the next several years.

It hasn’t always been that way around, as our graph shows. From the late 1960s to the early 1980s, inflation topped interest rates. If you put money in a term deposit it bought less when you took it out again. There was a huge disincentive to save.

These days, though, your savings will buy you considerably more later than now, even after tax.

While some people will always prefer instant gratification, those with will power will be rewarded for waiting.

QI am amazed at people who still use EFTPOS cards for everyday transactions.

I maintain a Visa card with a P.I.N. that I use exactly like an EFTPOS card, and the most it costs me is $25 per year.

I use it to buy everything from my morning coffee to supermarket shopping, with the added advantage I can see at a glance where my money has gone and I only need one card instead of two.

The payments to Visa are linked to my cheque account that has an overdraft limit, and the Visa card is paid off on the due date without any interest.

If my account does trickle over into overdraft the interest on the overdraft is about 12 per cent as opposed to the 19 per cent charged by most credit card companies.

AGood thinking. The only drawback is for those who aren’t disciplined about their credit card spending. At least with EFTPOS you can’t spend money you don’t have.

Still, even those people would be better off paying 12 per cent than 19 per cent.

Come to think of it, I operate similarly to you, almost never using EFTPOS — except that I use good old-fashioned cash for most purchases under $20.

Remember cash, you young ones? Those oblongs of paper and metal discs? You pay no fees for using cash, and it speeds up transactions.

Sure carrying coins can weigh you down a bit. But there’s good news on that front. From July 31 the Reserve Bank will introduce lighter 50, 20 and 10-cent coins.

QWe entered the managed fund market in 1999 with modest lump sums plus drip-fed contributions into about eight different funds, all unhedged, with three different managers, some in NZ but most offshore.

The international sharemarket has not done well since then, and the NZ dollar has strengthened considerably. Two of the funds have closed due to losses, forcing us to reinvest.

The standard response to “managed funds are useless” is that we should participate in such schemes for “the long term”.

What do you define as “long term”? Has this definition changed in the last 6 years?

Note that if the answer is “10 years on average”, this implies that, on average, in another 4 years we should be much better off than if we had chosen to invest in a second Auckland property or term deposits.

Looking at the period 2000–2010, what will it take to achieve that in terms of exchange rates and sharemarket indices?

It’s quite feasible to come up with a scenario in which property prices, term deposit rates and the Kiwi dollar all fall and New Zealand and world sharemarkets continue to rise — in which case you might well be better off with your investments than the alternatives.

However, it’s also quite possible that you won’t. And that won’t prove anything, other than that you have been unlucky so far.

Generally, I regard “long term” as ten years or more, although some people who don’t mind risk will invest in long-term investments, such as shares or property, over shorter periods than that.

Recent calculations show that, over a single year, you have about a 60 per cent chance of doing better in New Zealand or world shares than in term deposits. Over five years, it’s close to 80 per cent; over ten years it’s about 95 per cent; and over 20 years it’s more or less guaranteed.

Perhaps 2000 to 2010 will turn out to be one of the 5 per cent of decades when your share investments underperform term deposits. As you say, you’ve suffered from the unusually big rise in the Kiwi dollar — a risk you took when making all your international investments unhedged. And the performance of international shares earlier this decade was unusually awful.

Note, though, that it’s not correct to say international shares have continued to do badly. During 2005, the average return on overseas share funds, before tax and fees, was 18.5 per cent, according to Aon. Who knows what lies ahead?

How about the performance of shares versus property? That’s trickier. Everyone differs on what sort of property to look at, how much rent should be included and so on. And there’s a shortage of reliable data on sectors such as rental housing.

We can say this much, though: Because property is generally riskier than term deposits but not as risky as shares, we would expect average long-term property returns to lie somewhere in the middle.

There’s a greater than 5 per cent chance, then, that property will outperform shares over a decade. And so far this decade has been unusually strong for property.

More often than not, though, shares will come out on top. They are the riskiest of the three categories. If they didn’t usually beat term deposits and property, why on earth would anyone ever invest in them?

If I were you, I wouldn’t give up on managed funds at this stage. Make sure, though, that you are in lower-fee funds, as in some cases the fees really eat into your returns.