HomeNZ Herald 29 April 2006
NZ Herald Q&A Column
This article was published on 29 April 2006. Some information may be out of date.

About a month or so ago, I was at a bank and was advised to start unit trust investments for my daughters’ further university education (in about 8 to 12 years time).

My husband and I decided to choose the growth strategies, which invested high percentages in world shares and world fixed interest. We invested an initial lump sum of $1000 and are contributing $50 per month.

Now my concern is the proposed capital gains tax that will kick in next April. Will this tax eat into our investment?

Should we close the unit trust now and put money into local financial companies, some offering higher interest rates? Or should we switch into conservative strategy or moderate strategy unit trusts, with lower emphasis on overseas products?

I also wonder what I should do with my retirement plan, which is also invested in a growth managed fund? I also have about $9000 in Tower Tortis international share fund, which I invested several years back and have not gained any income since investing.

I wonder whether I should sell them before the proposed capital gains tax comes into force.

AHold your horses. The proposals could well change between now and next April. Even if they don’t, the changes might actually help two of your three investments.

Firstly, let’s look at your choices. The “growth” unit trust for your daughters’ education is probably good, although I have two concerns:

Your retirement savings choices are good, too — once again as long as you stick with them for the long haul.

Don’t worry about not getting income from Tower Tortis International. The low dividends on world share funds are often eaten up in fees. But the capital gains — reflected in the rising value of your units — can be high.

How will the proposed changes — if they go ahead — affect your investments?

Our table, calculated by Andrew Brockway of AMP Capital Investors, shows low and high returns on active funds, in which the managers choose which shares to buy and sell, and on index funds, which invest in the shares in a market index.

Tortis International is an index fund. The share funds in your retirement plan and your daughters’ saving plan could be either index or active. Index funds usually have the word “index” or “passive” in their title. If you’re not sure, ask the bank.

As the table shows, after-tax returns on active international funds will be higher after the changes, because 85 per cent of their capital gains will be taxed, compared with 100 per cent now. 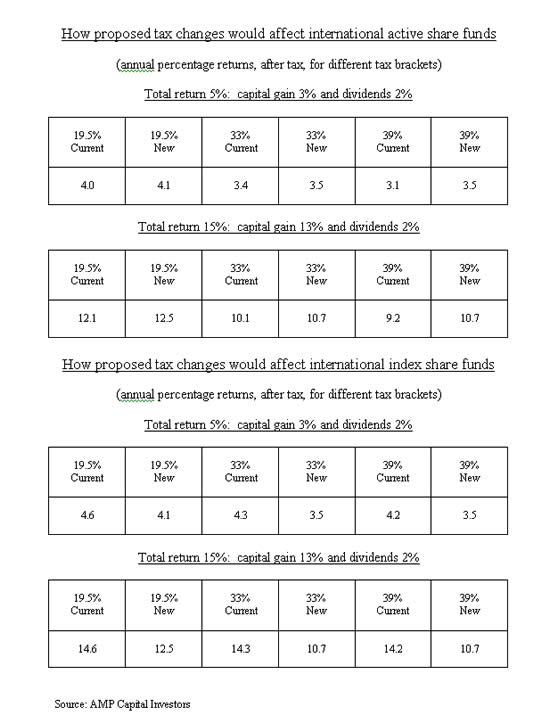 However, returns on international index funds will be lower — especially in years of high capital gains. Currently, these funds pay no tax on capital gains, but under the proposals they will pay tax on the same 85 per cent as do active funds.

The advantages of international diversification, and the high average returns on shares, will still make it worthwhile to have a considerable portion of long-term savings in international shares.

I certainly like them better than finance companies, which pay higher interest rates than banks because their investments are riskier. You could lose lots if a company defaulted. Stick with what you’ve got.

QI had to have a comment on your reasons for arguing last week that Grey List shares get favourable treatment compared to NZ shares because the local shares and those of Australia pay out more in dividends.

Moving on, I firstly refer you to the holdings of the NZ Super Fund. They are not heavily invested in Grey List shares for nothing.

Then it must be assumed that those who invest directly in overseas shares are probably more successful than your average punter or they would not do it. They then ultimately benefit the country by spending at least some of it here. Investing in NZ shares is more a zero sum game for the NZ economy while overseas investment gains are a genuine addition to wealth when repatriated.

Treating Australia in the same way as New Zealand will assist their economy by further cash flowing their way, not ours, and their market is much more likely to overheat than ours because of compulsory superannuation anyway.

On a personal view, bringing back $500,000 would probably end up at least in part, in the already overheated property market.

AYou seem to think I’m against investing in overseas shares. Nothing could be further from the truth.

Most of my long-term savings are in international index funds and, as you point out, I’m in good company. The NZ Super Fund, or Cullen Fund, has more than half its money in international shares,

On some of your specific points: