QIn your column last week you said, “For every month you delay (joining KiwiSaver), you could miss out on the equivalent of $700 to spend in retirement.”

In reality this applies today, but in a year’s time the month is worth less as it is one year closer to retirement.

AYou’re quite right. I didn’t make that point clearly enough. And given that it applied to just one reader’s situation, I’ve decided to make the point more generally this week, as it’s pretty important.

KiwiSaver has been around for more than two years now. Most eligible people who haven’t yet joined have already missed out on thousands of dollars of spending money in retirement. For the young, it’s many thousands of dollars. If you’re not yet in the scheme, it’s a really good idea to join now so you don’t miss out on further thousands.

As we all know, there’s no such thing as a free lunch. The price of lunch here is your contributions to KiwiSaver.

Still, in the example in our table below — of an employee currently earning $50,000 who contributes 2 per cent of pay — the contributions are less than $20 a week. And while the table assumes that pay and contributions will rise 3 per cent a year, generally that shouldn’t be hard to cope with.

You end up with vastly more in retirement than you personally put in because the government and in many cases your employer also contribute, and because of compounding returns.

Looking at other income levels, for someone earning $30,000, 2 per cent of pay amounts to less than $12 a week. For someone earning $80,000, it’s less than $31 a week. Of course those making lower contributions will end up with less in retirement. But for everyone except people over 60 — more on them in a minute — there will still be a big difference between starting now and starting two years from now.

As the table shows, a young person earning $50,000 today, and earning a 5 per cent annual return, might miss out on close to $100,000 in retirement by delaying joining KiwiSaver for just two years. And if they invested in a riskier fund with a higher return, they could miss out on considerably more. Even a 50-year-old on $50,000 might lose $15,000 by delaying — and more in a riskier fund.

The exception is people 60 to 64. At your age, you get exactly five years in KiwiSaver regardless of when you join — as long as you get in before your 65th birthday. However, if you are likely to retire before 70, it’s a good idea to start now so you get as many years of employer contributions as possible.

Why are the differences so big for just two more years of membership — especially for the young?

As stated, our numbers assume the employee’s pay rises by 3 per cent year — which is probably reasonable given the likelihood of some promotions and moves to higher-paying jobs.

Over long periods, this growth greatly boosts the employee’s and matching employer’s contributions, even assuming the government’s maximum tax credit doesn’t rise at all. For example, in the 47 years between age 18 and age 65, an employee’s pay will grow almost ten-fold.

Adding two more years of large employee and employer contributions makes a big difference. So does earning 5 per cent a year on a large balance. 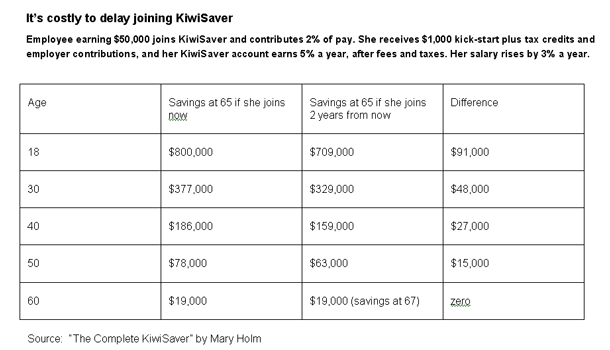 QI joined KiwiSaver in September 2007, a month before I turned 65, and retired the following March. Therefore I had only a few months of employer contributions. Since retirement I’ve made no further contributions, mainly because I haven’t been sure of what I should do.

Could you please advise what would be the optimum amount to be paying in to get the maximum benefit from the scheme, be it lump sum or monthly payments, or both.

AGood on you for getting aboard while you could.

Now that you are no longer employed, you’re in the same KiwiSaver position as the self-employed, beneficiaries and other non-employees over 18.

Try to contribute $1043 a year, which will be matched by the tax credit. If you can’t afford that much, put in as much as you can.

You can make your contributions in any pattern — $20 a week, $87 a month, sporadically or all in one go — during the KiwiSaver year, which runs from July 1 to June 30.

Setting up regular contributions is a good idea. It makes budgeting easier, and you’ll buy more units in your KiwiSaver fund when the price is down than when the price is up. That means your average price will be lower than the average market price. This is sometimes called dollar cost averaging.

QI am a little puzzled by your recent answer to a couple looking for a better return on their house deposit. Two questions came to mind.

Firstly, given that Working For Families is income tested at 20 cents in the dollar, and the husband is in the 33 per cent tax bracket, they will lose more than half of any extra interest they earn.

But PIE income is taxed at no more than 30 per cent, and is ignored in the Working For Families income test, so wouldn’t your couple get to keep almost another quarter of their interest if they invested in a PIE instead of a term deposit as you suggest? Many banks now offer term PIEs with the same security, interest rates and terms as their term deposits, so why not?

Secondly, with the wife not earning, wouldn’t it make sense for the couple to invest only in her name (with a suitable loan agreement between them for his half of the money) so that they can further reduce the tax from his 30 per cent PIE tax rate to her 19.5 per cent?

Now they’re keeping an extra third of the interest — quite possibly thousands of dollars a year.

To explain to other readers, once a couple’s income is more than $36,827, the Working for Families tax credit is reduced by 20 cents for every extra dollar earned. If you add 33 per cent tax into the mix, an extra dollar of interest will end up as less than 50 cents in the hand.

In other words, the couple can ask the bank to withhold tax on their interest at the non-earning wife’s lower tax rate of 19.5 per cent.

The withholding tax is not a final tax. “The income should be included in the couples’ separate tax returns on a 50:50 basis (or other proportion if they can show that a 50:50 basis is not appropriate),” says Inland Revenue. Each spouse can claim a credit of half the withholding tax. That means the husband would end up paying further tax, to get it up to 33 per cent on his share of the interest, but the wife’s interest would stay taxed at the lower rate.

Note the mention of tax returns, which the couple might not currently have to file. If that’s the case, the non-earning wife still wouldn’t need a tax return. But, if the husband’s share of the interest income is more than $200 a year, he would need to file a tax return.

What happens if the couple moves their savings into a PIE? There are three advantages:

Clearly a PIE is the way to go.

What about your idea of the husband lending the money to the wife, so it’s all taxed at her rate?

Inland Revenue says, “Income from (PIE) investments held in one investor’s name cannot be transferred to another person, eg. a spouse on a lower income. However, investments can be sold or gifted. There are rules regarding gifts made or the valuation of property sold to associated persons.”

When I asked Aylton Jamieson, assistant tax director at the Institute of Chartered Accountants, how this might be done, he suggested legally transferring the savings into the wife’s name, with debt forgiven at $27,000 a year to avoid gift duty. Each spouse would have to get separate legal advice to do this.

“If the husband was to sign up to that agreement, that may leave him slightly exposed in the event that the couple were dissolved,” says Jamieson — making the marriage sound a bit like jelly crystals. “But I would never discount the ingenuity of commercial lawyers to draft something up to cover that possibility.

“If dissolution was a worry, it would be possible to use a discretionary trust and allocate the income out to the wife. This would solve that problem, but create additional compliance,” he adds.

It sounds as if you could spend more on legal costs than you gain in tax savings — to say nothing of all the hassle. I like the KISS principle — keep it simple, stupid — even if it means paying somewhat more tax.