HomeNZ Herald 5 July 2008
NZ Herald Q&A Column
This article was published on 5 July 2008. Some information may be out of date.

QI am an average Joe Bloggs on an average middle class income. Quite frankly I’m tired both mentally and physically of working long hours just to keep myself in a job (just above broke).

What I’m also tired of is watching the many scandals out there both below and above my income bracket, ripping the system off — the poorer by manipulating the benefit system and the richer Blue Chip type buggers manipulating the legal system.

Meanwhile I’m stuck in the middle seemingly supporting both ends of the spectrum in one way or another.

What is in it for me? Not a lot really. So can you please advise me of any legal way of reducing the tax burden I pay via PAYE?

To be clear, I’m not after tax avoidance ‘per se’. I’m just asking for the same benefits and perks that those buggers I’m supporting appear to gain.

Please help me and the rest of middle class New Zealand — the only ones who appear to be prepared to act with integrity and do an honest day’s work.

AI’m afraid there aren’t many tax breaks for PAYE payers — other than rebates for donations, childcare or housekeeper expenses — unless you have children 18 or younger.

Almost all families with kids under 18 who earn less than $70,000 are eligible for the Working for Families tax credits, as well as many families with income up to $100,000 and some large families on even higher income.

And the credits are pretty generous for some. A family on $30,000 with four children gets $328 a week, which is more than $17,000 a year. For more information, see www.workingforfamilies.govt.nz.

Apart from that, there are ways to pay less tax on returns on your savings — perhaps by investing in property or in KiwiSaver or some other PIE (portfolio investment entity) investment — but I don’t think that’s what you’re talking about.

While it might not seem to be the case, the fact that you can’t deduct much against wages or salaries is a wonderful feature of the New Zealand tax system. Having lived in the UK, US and Australia, where tax return time was a big hassle, I appreciated coming back here and skipping all that fuss.

Sure, it might have felt good to deduct mortgage interest — and in some countries all sorts of other stuff — but in the end it comes out in the wash. Tax rates have to be higher, or government services lower, to compensate for tax deductions. The simplicity of the New Zealand tax system for wage and salary earners is something to be proud of.

But what about fairness — and your idea that those on middle incomes support others? It’s time to count your blessings.

Would you really prefer to be one of those people who manipulate the welfare system? To be on a benefit in the first place, life has to be treating you fairly harshly. And then you have to live with your conscience, and the knowledge that you might get caught and punished.

In any case, the only way to stop cheats is to monitor all recipients closely. I, for one, am prepared to put up with some welfare fraud if that means that deserving beneficiaries aren’t under Big Brother’s constant scrutiny.

What about envying rich ripper-offers? Does the lifestyle of the wealthy — with all the pressure to look good, do the right things and have the best toys — really appeal to you?

At the extreme, a story in last weekend’s Herald said some “Super Rich” pay 225 pounds for a cocktail. I don’t know about you, but I would have trouble swallowing that — literally and figuratively.

And that’s before the rich person is under suspicion for foul play, which must make even a chat with the neighbours none too relaxing.

Over all, it seems to me that life is better in the middle than as a manipulator at either end of the income scale.

I suggest you try to spend less time dwelling on what others get and more time appreciating what you have. Life for Middle New Zealand could be a lot worse. 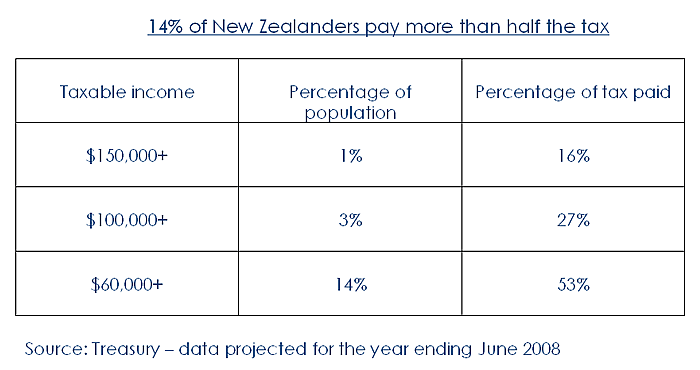 QAs a parent considering signing my children up for KiwiSaver, I was rather alarmed by the story on the Fair Go programme on Wednesday night.

This is a programme that can usually be relied on to present a properly researched story, so I wondering whether you have any comment to make.

AQuite a lot of comment, actually. For those who didn’t see it, the programme was about a father who had signed up his 17-year-old son for KiwiSaver, on the mistaken understanding that the son wouldn’t have to contribute until he turned 18.

The son, who has a part-time job and is saving to go overseas, was annoyed that he had to contribute $60 a month to KiwiSaver, and wasn’t able to get out of the scheme. He was described as a “Trapped KiwiSaver”.

There were three important points missing from the programme:

Having said all that, I agree with Fair Go that KiwiSaver is not a great place to save for children, because the money can’t be used for education, starting a business or other purposes.

And because children do not get compulsory employer contributions nor the yearly tax credit of up to $1043 — points surprisingly omitted from the Fair Go programme — there’s nothing to be gained from making ongoing savings for children in KiwiSaver compared with elsewhere.

However, children do get the $1,000 kick-start and $40-a-year fee subsidy, so it makes all the sense in the world to sign them up while KiwiSaver is that generous. Make just a small or zero initial contribution — which several providers will accept — and then leave the kick-start to quietly grow. Most providers have suitable accounts to do that.

As the young man on Fair Go discovered, if your child currently has a job from which PAYE is taken, or starts a job within a year of sign-up, 4 per cent of their pay will go to KiwiSaver until they can take a contributions holiday.

In that situation, a parent might want to reach in their pocket and make up the 4 per cent for the child. In most cases, that won’t be big dollars.

In any case, I would hope that parents of children old enough to have PAYE jobs would discuss KiwiSaver with their children before signing them up.

I’m not dumping on the father on Fair Go, who was apparently given incorrect information by his provider. And the fact that a parent can commit a child to KiwiSaver is an issue that has worried me a little. My little red book, “KiwiSaver: How to make it work for you”, includes the following:

“What if, at 21 or so, your child said, ‘I don’t want this commitment. I can’t be bothered applying for contributions holidays. I’m just not going to do anything.’? Are they then in legal trouble?

“Inland Revenue answers this way: ‘They are not in legal trouble per se, but they are definitely in KiwiSaver until they reach one of the exit signs…. Effectively, once enrolled in KiwiSaver, the only way an employee can manage whether, or how, they contribute is by way of a contributions holiday — this after 12 months of making contributions’.”

This is not ideal. Like Fair Go, I would like children to able to opt out of a parent’s commitment. But, because of the contributions holiday provisions, it is hardly a big issue.

All in all, I think the pluses for kids in KiwiSaver — if you do it wisely — easily outweigh the minuses.