GRAPH: SHARES versus HOUSE PRICES from end of 1979

Right side — lines from top show: 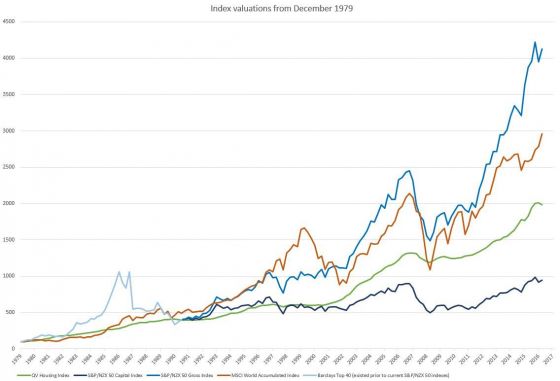 QYou will no doubt have read Brian Gaynor’s recent column, in which he says: “Thirty years ago, on Friday, September 18, 1987, the long-standing NZX benchmark index reached an all-time high of 3968.89. This capital index, which is now called the S&P/NZX 50 Index, has never returned to this level and is still 8 per cent below its 1987 high”.

This doesn’t quite fit in with your mantra that you have to be in the share market for at least ten years to avoid the lows, does it? However, there have been good dividends on a lot of shares along the way, so all is not totally lost.

Will you admit now that property (including rents) has been the better investment over the past four decades?

Still, I wouldn’t be putting any bets on the property market continuing the ridiculous run of the last few years over the next decade. For the sake of our children I hope it levels out for a while and gets back to a reasonable ratio to median income.

ANo I won’t “admit” any such thing! As you say, the index Gaynor writes about doesn’t include dividends. And that makes a bigger difference than you apparently realise.

Why on earth would you exclude dividends in share returns? Some people spend dividends rather than reinvesting them, but they’re still part of the return. Excluding dividends is like excluding rent in rental property returns.

But hang on a minute. Isn’t that what the graph does? The QV Housing Index (green line) shows growth of detached housing valuations. Why haven’t we included rent?

When you stop to think about it, that’s not do-able. There’s data on average rents. But unlike shares, rental property comes with ongoing expenses such as rates, insurance, and maintenance — which can be huge when you have to replace a roof or something.

Also, most landlords — except those who have owned a rental for many years — pay mortgage interest. In fact, many landlords find that expenses including interest total more than rent, and they make ongoing losses. And the tendency for that to happen will increase when mortgage interest rises. Their investments make sense only when they sell the property at a profit.

Taking all this into account, there’s no way to come up with representative numbers for net rental income. On average they will probably be positive, but how big?

All we can say is that the graph shows total returns on NZ shares since the end of 1979 are twice as big as house price increases. Shares look a better bet to me.

Okay, you might say, but the graph also shows that shares are much more volatile, adding to risk.

True, but the vast majority of landlords take on a different sort of risk, by borrowing to invest — something that few share investors do.

Borrowing ups the ante. If the investment goes well, you get gains on the bank’s money as well as your own. But what if you’re forced to sell — perhaps because you lose your job — when house prices are down? If your mortgage is bigger than the proceeds of your sale, you can end up with no investment and owing the bank. It happens.

Even if you sell the property at a gain, does it more than cover your losses over the years because of interest and expenses?

The added risk from borrowing can certainly make rental property a bigger worry than shares.

And there are other ways that shares are less risky:

On top of all that, investing in a wide range of shares or a share fund — the best way to do it — is much less hassle than a rental property. You’re not going to get the 2 a.m. phone call from the tenants saying the washing machine has flooded the house, or the news that your tenants have used the house as a meth lab.

Then there are the disputes. In 2016, 16,600 landlords and 2300 tenants made complaints to the Tenancy Tribunal, and many more were resolved in mediation. You don’t get that with shares.

You can get around this problem by dripfeeding money into shares over time, as happens automatically with KiwiSaver. Then only a small proportion of your money will “fail” the ten-year test.

QYou write a financial advice column, and do a fine job. However, the recent Q&A about the couple who want to get their children into a better school zone — and wonder whether to move and take on a much bigger mortgage or rent out their current home and become tenants inside the zone — gets into parenting and the zone issues. We have been through the dilemma ourselves and as an educator I know how this game is actually played.

First, you apply for out of zone enrolments for every school in your target area. It is a ballot system so your chances are as good as anyone else’s.

If that fails, you rent in the zone until your enrolment is confirmed, and then you go home. The whole thing would probably only take about two months. A few schools, like Grammar, try to force the kids out, but the vast majority of the time, “in” means “in”. Subsequent children then go on a different ballot and are virtually guaranteed enrolment.

The kids get to school on the bus, by train, or a stay-at-home parent drives them. It really is that simple. Our girls catch the bus at 7:05 am and arrive well before 8. They get off the bus at ten to four.

AYou’re quite right — I’m out of my depth when it comes to the school zone game. If the couple are interested in playing the game, they should probably talk to others in their suburb.

QThe writer two weeks ago wished to move from a school zone with a low NCEA pass rate. Some schools manipulate pass rates (e.g. do not let those unlikely to pass enrol), so judging by pass rate is not always appropriate.

There is also much more to education than just academic qualifications. It is more important to get on with a large cross section of the population. Doing so increases your Emotional and Social IQ.

Many successful business people and other leaders have not gone to prestigious schools. My own daughters went to a decile 3 school yet excelled at university. I would hope that being able to relate to people with different ethnicities, skill sets and other attributes will be of great benefit to them and society in later years.

AAs I heard someone on the radio say recently, “First in school, last in life”. In any case, what goes on at home is probably more important than what happens at school.

QMany kids in our area attend an out of zone school, regarded as an excellent school, that seems to take anyone who applies. Many others have ballots, and even a private school might be an option.

With children now at and coming up to high school we decided to downsize. Moving to a smaller house and section means so much less time spent on housework and maintenance as well as less debt and lower living costs. It will not be so hard for us to cover the extra costs of teenagers — sports trips, camps, opportunities to travel overseas, clothes etc — so that our kids can save their money for higher education. Our 14-year-old is actually doing this really well.

Living with less stuff has been so freeing! I wonder if this family should explore space creating design options for improving their quality of life in their current house, and get some really good information about the various college options, before deciding to increase their mortgage by so much.

ADownsizing is a great idea. The couple said their current house is “getting too small for us”. But as you say, there are many creative ideas on how to make more of every cubic metre.

QChanging homes for a perceived better school can be misleading. If a person does not want to learn they probably won’t, until it becomes imperative that they do for survival.

Would not exploring sending the youngster to boarding school be an option? Costs could be similar or perhaps better if it released the stay-at-home husband to seek work.

AYes, it could be really disappointing to uproot the family and then the children don’t make the most of their new school. And boarding school is indeed another option.

QI don’t know what the person’s job is, but otherwise the answer was obvious: move out of Auckland.

I was buying some food at the Mount Maunganui market last weekend, and overheard a conversation between the stall holder and a customer. The stall holder was an ex-Aucklander and reckoned leaving was the best thing they’d done. The customer was from Auckland and you could hear the envy in his voice. “Over it” was how he described the city.

As an immigrant myself, I’ve lived in various places in NZ, including nine years in Auckland. After nearly 30 years here, one thing I’ve never quite understood is New Zealand’s parochialism. The provinces are seriously underrated in this country. Thank you for your time.

AYou — and the other correspondents above — are the ones who should be thanked, for bothering to write with such good suggestions and info.

It’s hard to argue with your point unless, as you suggest, the mother couldn’t get good work outside the big smoke.