HomeNZ Herald 19 July 2008
NZ Herald Q&A Column
This article was published on 19 July 2008. Some information may be out of date.

QMoney is something we all should worry about I guess. I am one of those fortunate (feckless?) souls that has never worried about money, been flat broke several times, remarried with an income and little else, and now find that I have enjoyed a wonderful spendthrift life.

We get by on the state super having a mortgage-free home. Petrol is purchased less frequently, but I cycle more and we still eat well.

I have done all the travelling overseas and in New Zealand to satisfy my wanderlust. And as I am restricted to one glass of wine a night I am so thankful I had a wonderful party time while I could enjoy drinking, perhaps to excess.

The point of all this? Reading your column I feel too many people worry about financial troubles that will probably never happen, so perhaps at times your advice (which I believe is excellent, if irrelevant to my present financial situation), should include the thought that people need to lighten up a bit.

Stop worrying about the financial strain of providing three cars, a boat, a bach, and a home with three bathrooms and four toilets for children that will never thank you for it anyway.

The things that seem important at 45 are not high priorities when you are in your seventies.

AWhat a wonderful letter to read in these increasingly depressing financial times.

People in my sort of role tend to err on the side of suggesting readers be cautious and save for a rainy day. We are unlikely to have someone write to us years later feeling angry that they took that advice, whereas if we err the other way that could well happen.

So I’m reluctant to say “Enjoy yourself, it’s later than you think.”. But you’ve said it beautifully. I’ll forward any future angry letters to you!

QYou stated an employer could pay up to $1043 into an employee’s KiwiSaver account, and be reimbursed by the Government.

I would like to know what would happen if the employee had two or three employers, each employer not knowing that the others were paying extra contributions? I can envisage the maximum of $1043 being exceeded.

AThere’s no limit to the number of employers who could make contributions of up to $1,043 each and be reimbursed. And it doesn’t matter whether they know one another are doing this.

What’s more, after the employee has been in KiwiSaver for more than a year, he or she could take a contributions holiday and contribute no more through any of the jobs. The various employers could keep putting in $1,043 each and getting that reimbursed. What a kind government!

Note, though, that if the employee is not contributing via deductions from their pay, employers’ contributions would be taxed in most cases. That’s because those contributions exceed the lower of the employee’s PAYE contributions or 4 per cent of pay. Still, it’s money for nothing, except administration costs.

Basically, there are three ways an employee can “do” KiwiSaver, as outlined in the table. The first — putting in 4 per cent of pay — will in most cases get you the most from the government and your employer. But the last is a pretty nice deal if you can’t afford to keep contributing after 12 months, or you are reluctant for some other reason. 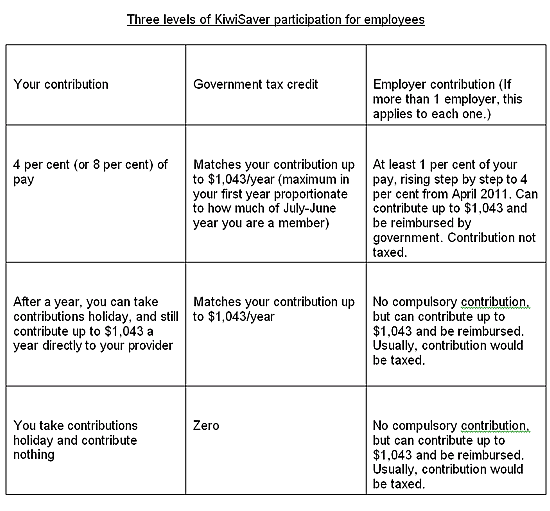 There is actually a fourth way, sometimes called 2 per cent plus 2 per cent, which I mentioned briefly in last week’s column. I suspect it’s not commonly available — although that might change as people learn about it.

If an employer and employee agree, the employer can help its employees to make their contributions in the first few years of KiwiSaver.

The only difference for employers from the usual pattern is that they contribute 2 per cent of pay rather than 1 per cent in the current year, ending March 2009. After that, they make the usual employer contributions.

Clearly the 2 per cent plus 2 per cent arrangement is particularly attractive for lower-wage employers — who can offer a nice option for their employees without it costing them anything.

QThose employers who are so bloody minded in trying to make their employees who join KiwiSaver sign a waiver to get out of the 1 per cent contribution cannot think very much of their employees, and will get less loyalty from them.

Their names should be published.

ASorry, but I’m not obliging for two reasons. Firstly, I’m not sure I agree that those employers are particularly bad guys — as long as they pass on to employees the benefit of the government’s reimbursement. See the next reader’s letter.

Secondly, I doubt if anyone has such a list anyway.

I do, however, have a list of at least some of the employers that offer the 2 per cent plus 2 per cent arrangement described above. Given that it can be a great way to help people into KiwiSaver, let’s applaud those offering it. The list comes from Peter Conway, economist with the NZ Council of Trade Unions. Here it is:

Good on you all!

The “total remuneration” approach is not, as the government likes to think, the invention of HR departments. It’s about paying employees the same amount to get the same job done.

What matters to me is not whether an employee can afford to save for retirement, or even needs to — what matters to me is that equivalently qualified employees who do the same job should get paid the same total amount before tax. The government is now outlawing fair pay.

This is probably the last gasp of a government that is desperately trying to stop people doing what they think is best for their own businesses.

I just hope that National says it won’t have a bar of such an unjust interference in the dollar value that I have to place on my people. Even if this government manages to cobble the numbers together to get the law changed, let’s hear National say it’s a nonsense and will be changed.

AI have some sympathy with your approach.

For the sake of other readers who may not have read last week’s column, the government is planning to stop employers from reducing employee’s pay to take into account the employer contributions to KiwiSaver.

While some say this change is fair, you and others, including the Employers and Manufacturers Association (EMA), have the opposite view — wanting to treat all employees, both KiwiSaver and non-KiwiSavers, alike.

“Employers have been reviewing their policies in the wake of KiwiSaver to ensure equity amongst all staff. Shifting the goal posts now reintroduces inequity,” says David Lowe of EMA (Northern).

“All sorts of benefits like cars are paid to employees either in kind or cash along with a wage or salary. It’s normal to ensure the total value of all pay and benefits are reflected in the total remuneration package.

Labour Minister Trevor Mallard’s plan “would treat KiwiSaver apparently as something apart from all other forms of pay, including non-KiwiSaver superannuation schemes. It’s a nonsense.

“Any two employees doing the same job to the same level of performance should be paid the same total remuneration. It would be simply unfair to provide lesser pay and benefits just because people do not join KiwiSaver.

“The Government apparently has no regard whatsoever for the effect a change like this would have on business and workplace relations,” says Lowe.

Like beauty, fairness seems to be in the eye of the beholder.