Over the next few weeks, this column will run highlights from Mary Holm’s quarterly newsletter Holm Truths. Mary’s regular Q&A column will resume on October 27.

A woman I know wasn’t sure what to do. Should she renovate her current house, or move to a cheaper suburb and buy a house that was already up to the minute? She preferred to stay put, but would have to borrow to renovate and wasn’t sure if she could afford to repay that debt.

“How about saving for a while until you can do up your house without borrowing?” I suggested.

“Oh no,” she replied. “The place has to be renovated now.” She ended up taking out the loan and struggling with the repayments — to say nothing of spending a considerable sum on interest.

In a recent survey by the Retirement Commission, more than a quarter of the respondents said their greatest difficulty around managing money was that they didn’t have enough. But how much is enough?

Did that woman really have to have the latest in interior design? Do others have to have a plasma TV, a new car every few years, or new clothes each season? Are many New Zealanders quite simply expecting a higher standard of living than they can afford?

And — the most important question of all — do all these things really make them happier in the long term?

I’m not denying that some families find it hard to buy their children a second pair of shoes. These days in New Zealand, it’s reasonable to expect kids to have alternative footwear.

That’s their choice. But I think it’s worthwhile to challenge that thinking. Those who are willing to change their ways a little may find themselves facing a much more fun-filled and comfortable retirement.

In a telling study, students at Harvard University were asked whether they would prefer:

More than half chose (a).

“Other studies confirm that people are often more concerned about their income relative to others’ than about their absolute income,” said the Economist magazine. “Pleasure at your own pay rise can vanish when you learn that a colleague has been given a much bigger one.”

It’s too easy to dismiss this tendency as a pathetic preoccupation with keeping up with the Joneses, or rather keeping ahead of the Joneses. Life is, indeed, simpler if you have about as much money as the people you socialize with — whatever that level is.

Ask anyone who has changed countries and in the process switched to a lower standard of living. Often they will say they had just as good a time in the new country, if not better, as long as they mixed with people on similar incomes. They could all afford the same big night out.

But we can take this thinking too far. Would your friends drop you if your coat, car or carpet weren’t as flash as theirs? If you think they might, do you want them as friends anyway?

What about your own feelings — the excitement of the first night you watch TV on your new big screen, or the first time you drive your new car with all its features? Research shows us what we already know. We are happier at first, but we adjust quickly to such changes, and shortly afterwards we are no happier than we were before.

Let’s look at what we find in a typical middle class house that we wouldn’t have found a generation or so ago: a family room, more than one bathroom, a walk-in double garage, at least one computer, a fancy stereo, dishwasher, microwave, second TV set, many phones, and so on.

Despite the fact that families are smaller, homes are usually much bigger. The average 1977 house was 127 square metres, compared with 175 today, according to the Department of Statistics.

Also, we are much more likely to have more than one car per family, our bach is probably much more luxurious, and overseas travel has soared.

Admittedly, some of these items are cheaper than they were for our parents, after we adjust for inflation. But the price of the most expensive item of all, the home, has risen more than inflation, and so have some other items.

Are we happier with all this extra stuff? That’s hard to measure, but it’s certainly not clear that we are.

Before you buy another “must have” item that you don’t really need — and particularly before you borrow to buy it and thus end up paying more for it — stop and think.

If you halve your spending on such items over the years, and put the saved money into retirement savings, you’ll be freer with your spending at a stage in life when you’ll have more time to enjoy what you buy.

What’s more, your friends might appreciate your lowering the standards for them, too!

HE WHO HESITATES IS RICHER

Six questions to ask yourself before making a major purchase:

Some of the world’s richest people certainly live it up. But others live it down.

Others lower down the rich list are similar. In their thought-provoking book “The Millionaire Next Door”, Thomas Stanley and William Danko point out that many millionaires got rich by not spending much. Indeed, some of them, like Buffett, still live in “the house next door” and few people know of their wealth.

As author and scriptwriter Jonathan Clements puts it: “The folks with the big house, fancy cars and designer clothes are, no doubt, loaded. But they may be loaded with debt.” 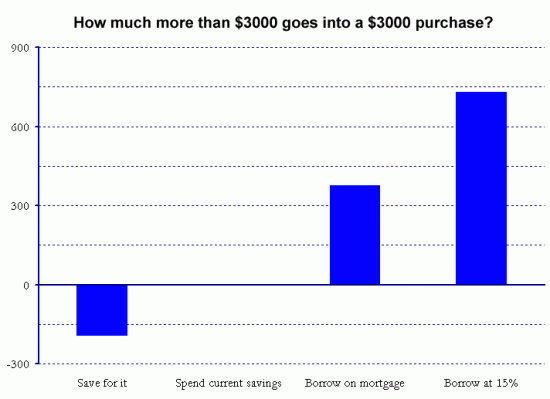 Let’s say you really want to buy a $3,000 television set. If you have enough money to buy it out of your savings, that’s great. If not, you have several options:

With the second two options, of course, you have the pleasure of watching the TV sooner. But you pay quite a high price for that pleasure. The difference between the cheapest and dearest options is $934 — almost a third again of the $3,000!

Note that if you fund a purchase by adding to your mortgage, it’s a good idea to pay off that extra money as fast as possible. If you simply pay it off along with the rest of the mortgage over many more years, you will pay much more interest on it.