QMy question is in regards to employer contributions to KiwiSaver. My husband and I own a business, and pay ourselves as employees on PAYE. We are already both members of the KiwiSaver scheme.

I see on the first of April employers are going to have to start contributing to the scheme and will have the cost of that offset by way of a tax credit from the government. My salary is $15,000 and my husband’s is $110,000. What is going to be the best way of utilising the Government tax credit to our greatest advantage?

Can we start using the 4 per cent employer contribution to gain the maximum tax credit straight away? Should we also offer this to our KiwiSaver employees who are on around $35,000 salaries, if it isn’t going to actually cost us anything anyway?

A“Yes” and “yes” to your two last questions. I’m glad you brought up this topic. I’ve been meaning to point it out to everyone, as there is a KiwiSaver bonus here that I suspect most people don’t realise.

Employees are the main beneficiaries, so they should make sure their bosses are aware of it.

From the employers’ point of view, it costs you nothing — although it may be a hassle for payroll people. But it helps your KiwiSaver employees receive extra government money — over and above the kick-start, member tax credits and fee subsidy — which has got to be good for staff morale.

The bonus is biggest in the April 2008 to March 2009 year. It’s also biggest — as it happens — for someone making $26,075 a year before tax, who can receive $782 extra in their KiwiSaver account this coming year. The bonus gradually decreases over the next three years.

Employers will receive the tax credit by way of an offset against the employee PAYE tax they would otherwise send in to Inland Revenue.

The bonus arises from the fact that compulsory employer contributions are phased in over three years, but the employer tax credit starts straight away at its full amount.

Employers might as well maximise the credit — giving employees a bigger employer contribution than they would otherwise get, because it’s reimbursed by the government.

To benefit from the bonus, from this April 1, every employer should not stop at contributing 1 per cent of pay to every employee earning less than $104,300 a year. Instead, they should match each employee’s contribution dollar for dollar, up to $20 a week.

The employer will then get all of that money back, via the employer tax credit. And the employee will be left with more in their KiwiSaver account.

Above the $104,300 cut-off, however, the employer should just contribute the required 1 per cent. That equals more than $20 a week, and the employer will be reimbursed only the maximum $20 a week.

Our table shows how much the bonus is worth in the first year — assuming the employee contributes 4 per cent of their pay. The bonus for you, earning $15,000, will be $450, and for your employees it will be about $693. Not bad. 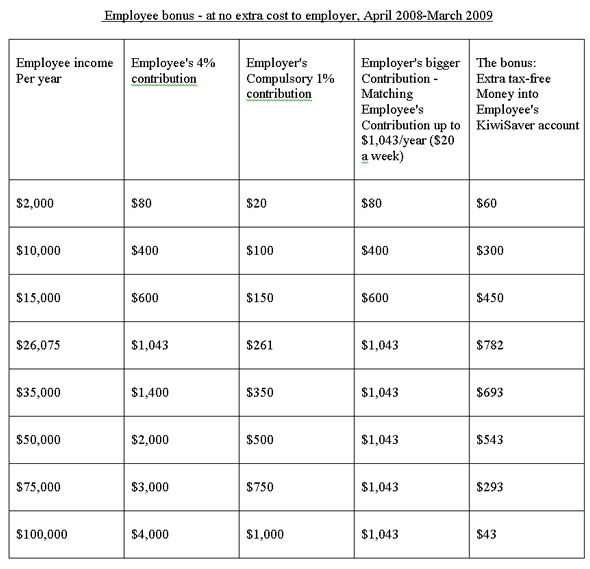 In the following two years, the employer should at least keep matching each employee’s contribution, up to $20 a week.

The schedule is as follows:

So how about it employers? Check with your payroll person to make sure it’s workable. There may be some complications — to do with frequency of pay — that will somewhat affect the amounts involved.

One expert says it might be easier to set it up so that every month is treated like a February — which would give month-by-month consistency, although the total employer credit would end up a little lower than the maximum allowed.

Admin issues aside, it’s great to get extra savings for your employees at no cost to you.

QI have joined KiwiSaver and my weekly contribution is just short of $20 per week.

I understand from your book that in order to take advantage of the full tax credit of $1043 I am able to make “top up” payments, which I intend to do once a year to bring my contributions up to $1043.

At what point do I need to make this top up — by 31 March each year i.e. in line with the tax year, or by 30 June each year, which would be in line with my contributions starting on 1 July when KiwiSaver began?

AIt’s a great idea to do that top up, given that for every dollar you put in the government will match it.

The deadline date is June 30 — and not just for you. It’s the same for everyone, regardless of what date they joined KiwiSaver. I suggest you put in the extra money in early to mid-June — at least in the first year — in case it takes a while for it to be credited to your account.

It’s a bit hard to judge how long all those steps will take. We’ll find out later this year.