New Zealanders’ increasing tendency to travel overseas is a wonderful development. We enjoy it, we learn tolerance and we pick up ideas — ranging from what to eat to how to make a living.

The trend has made us all more aware of the changing value of the Kiwi dollar. When it rises, we perhaps take a longer or more expensive trip. But when it falls, we don’t all stay home. Some of us modify our plans; others carry on regardless, maybe spending less on other items.

The government recently made changes that in many cases will increase taxes on share investments beyond Australia. And many New Zealanders have responded by saying they will withdraw from international shares.

Some plan to switch to Australian listed shares, which will be taxed much the same as New Zealand shares (but without dividend imputation). Others say they will bring their money home, investing in local shares, property or elsewhere.

But bringing your investments back to Australasia may not be a good idea. There are some strong reasons for keeping some of your long-term savings offshore — or, indeed, to make such investments if you don’t already have them. They are:

Footnote: While it’s possible to make international share investments hedged to the New Zealand dollar, most people don’t. So the data in this issue assume your investments are unhedged.

ALL OVER THE PLACE

The relative volatility of New Zealand’s share market becomes clear when you compare its performance with the markets in Australia, Canada, France, Germany, Italy, Japan, the UK and the US, since 1974.

Two reasons are often given for not investing in offshore shares:

“Dividends are lower and you miss out on dividend imputation.”

Overseas companies, especially beyond Australia, do tend to pay out lower dividends than New Zealand companies.

They’re more likely to keep profits to grow their business, which tends to boost the growth in share prices. So what you lose on the swings you gain on the roundabout.

And the lack of dividend imputation, usually on dividends that are low anyway, doesn’t make a great deal of difference to over-all returns.

Not really. Changes in the dollar’s value will sometimes increase volatility but just as often they will reduce it.

If, for example, international share markets are falling, foreign exchange movements can more than offset that, so that the value of your offshore shares still rises.

Note, too, that having overseas investments hedges you against loss if the Kiwi dollar falls. Foreign travel and imported goods such as cars will cost more, but the value of your investments will rise to help cover that.

Over all, having international investments reduces risk more than it increases risk. 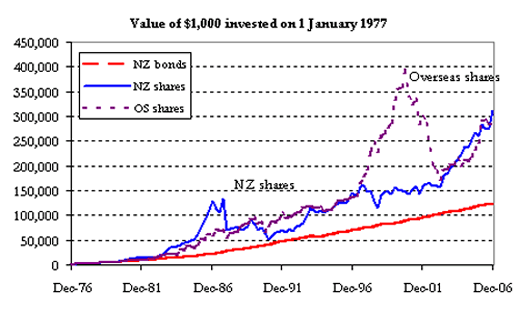 While New Zealand and world shares sometimes move in much the same way, sometimes when one is falling the other is rising — which can be of great comfort to those who have invested in both markets.

As it happens, in the period in our graph the two markets have performed roughly equally over the 30 years covered. But of course that isn’t always so. In the mid 1980s, for example, New Zealand way outperformed the world, and then way underperformed after the October 1987 crash. Much the same happened to the world market in the late 1990s and early this decade.